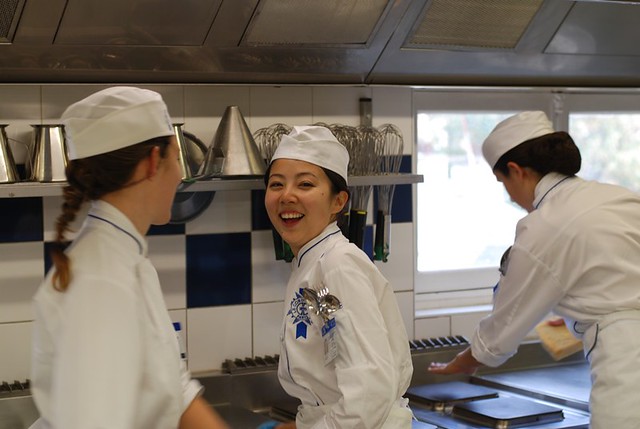 In 2011, during our quarter-life crisis, we spent roughly seven months living in Paris for me to attend Le Cordon Bleu’s pastry diploma programme. Here is a list of FAQ’s of what it was like to go to pastry school at one of the most famous institutions in the world.

So what is the course?
In pastry, the “Pastry Diploma” course is split into 3 terms: beginner, intermediate, and superior. Each term generally runs for 3 months, but occasionally there are 1-month terms called “intensive” terms running for those who can’t spare 3 months away from home. You’re able to do these three terms consecutively or as and when you’re available to complete the diploma.

In each term, there are 20 “subjects” to cover – e.g. 20 pastries to master. For each one, you get a demonstration class, and a practical class. There is also usually a mid-term exam and a final exam. The mid-term is often written, and based on theory, and the final is a practical exam based on a dessert you’ve already made. With a written exam, you guessed it – there are also theory classes. Personally, I loved that I sat for 2 hours listening about sugar, or chocolate, or butter. MUCH more exciting than listening about financial services regulations and their implications for two hours! You may also get one-off topics like nutrition, health & safety and hygiene.

What’s a demonstration, or “demo”, like?
A demo class usually combines a few groups of students into one bigger classroom, and the chef demonstrates the next practical class for you. For example, you’re about to make croissants? First, you’ll sit through a demo class with a chef who does everything you’ll be doing (plus more!) in class, so you can take notes. Put bluntly, it is like being on a live cooking show, with a lot less comic relief and a lot more seriousness and technique. Also, the chefs speak in French so there is an interpreter who narrates and translates for you.

Does it help to have experience?
Not exactly experience, but I would say interest in cooking and thus some general knowledge about it would be good. Nobody is here to teach you how to boil water, but nobody expects you to have had kitchen work experience. If you have always been interested, you probably know a thing or two about how to get started.

Are the chefs mean?
I wouldn’t say they are “mean”. I’d use these five decsriptions: stern, hard-to-please, well-respected, respectful of their art, and blunt-slash-rude. These people are here to tell you like it is, and it’s going to hurt. They don’t have much patience for people who they perceive to be wasting their time, e.g. people who might not take the classes seriously, or people who have fallen a bit too far behind the class. However, I would like to think that most of the time when they were cross with me, it wasn’t completely undeserved. Sure, they could’ve been a bit more tactful with message delivery, but they’re not here to make anyone feel special. Oh, and they will always, always, always rush you through a practical class. That’s done out of love, dear! In a “real” kitchen, nobody has time to wait for you to do things slowly, so here begins the training.

So how do you stay on the chef’s good side?
They’re each their own person, so it’s hard to say. However, it doesn’t hurt to work efficiently, keep your work station tidy at all times, and leave yourself time to do a good job on the final presentation of your plate. First impressions do matter!

What’s my schedule going to be like?
Depending on the type of session you’re in (regular or intensive), it can vary.

A regular session might see you at school for one or two classes a day. The classes run from Monday to Saturday, so there is a chance you might be at school on a weekend. There is no rhyme or reason to when classes get scheduled. (C’est la vie en France!) Sometimes the schedule needs to take into account other sessions/events the school runs for other purposes, too, so there were a couple of known times when I didn’t have class for almost a week! You get your personalised schedule that is specific to your “group” of students, at the beginning of the term. Your group is the group of people you will do practical classes with. Therefore, it is hard to sign up for additional courses (e.g. language) while in Paris because you never really know what your schedule will be like and what days will be best. A pain, I know…but think of all the down time you will get to hang out and eat pastries!

An intensive session is exactly what it is – very intensive. I did one term like this. The school squeezes all 20 of the demo and practical classes, plus mid-term exam and final exam, into 5 weeks. Therefore, there were days when I was at school for 3 3-hour classes at a time, with a little bit of a break in between. Those days were exhausting. It was the first (and possibly only) time in my life where I fell asleep at midnight and didn’t stir at all until past 9 am the next morning. You can sort of count on Sundays to do a bit of sightseeing or hanging out, but in general, don’t have high expectations for your availability if you’re in an intensive session – better to be pleasantly surprised by breaks than to expect them!

What’s it like inside the kitchen?
In the kitchen where practical classes are held, the atmosphere can vary. I think it’s safe to assume that beginner classes will always be a bit more tense than the superior ones, because the students are new to the environment and still quite nervous.

The atmosphere also largely depends on students. You may have really serious people who want to be the best at their trade, and so come across quite serious and competitive. You might have people who are just looking for a hobby and can afford this luxury, and they’re usually fun and relaxed. There are foreign students who are serious about what they do, and may speak even better French than you because they had to learn a second language to be there (and between English and French, obviously in this case French makes more sense!).

Do you get graded? (How do you pass or fail?)
At the end of each practical class, the supervising chef that day will grade you. The score is out of 5, and although they don’t show you your grade, don’t be surprised if you catch a 3 out of the corner of your eye. It’s a small scale, and 3’s are not uncommon. There’s no alignment between chefs either. So one chef might be an easy one with grades, and one might be super tough – it’s just luck. The important thing is the feedback you receive from the chef. Sometimes they can be real misers with their words, but as they come around to grade you, it’s your chance to ask questions.

Nobody really “fails” a class unless they didn’t complete the dish. If you’ve put up a good effort and the cake just looks horrible, you should at least get a passing grade. I had an experience of a cake gone wrong that I salvaged valiantly, and I definitely don’t think I failed that class.

At the end of each term, there is a “graduation ceremony” for you to receive your certificates. At the end of the diploma course, there is a fancy graduation at a nice club in Paris. At every ceremony, they will announce the top five students that term.

What were some of the things you learned?
Here’s a complete list of blog posts I wrote about my classes at Le Cordon Bleu